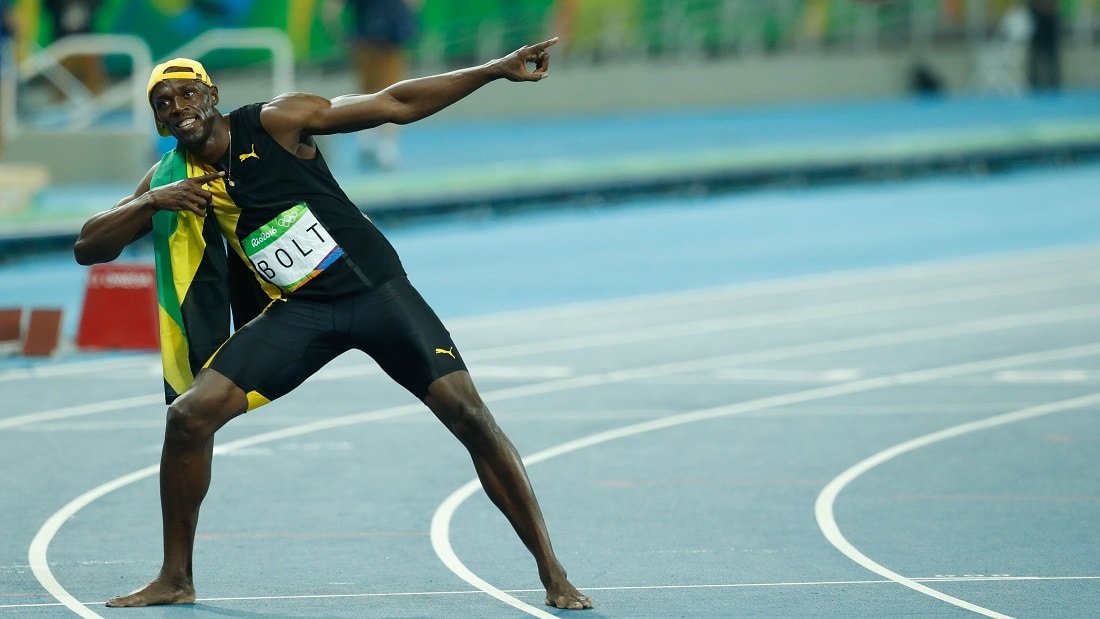 Photo by Fernando Frazão / CC BY

He’s an eight-time Olympic gold medalist. He’s the only sprinter to win both the Olympic 100 and 200 meter titles three years in a row. And he’s the first person to hold both sprint records since fully automated time became mandatory. So, he’s rightfully considered the greatest sprinter of all time. But is Usain Bolt vegan?

No, Usain Bolt is not vegan. He ate a lot of junk food early on in his career, and although he cut down on chicken nuggets and transitioned to a healthier diet with more vegetables later on, he has never stopped eating animal products. He has even co-founded a non-vegan restaurant chain.

Although Usain has never talked about animal rights, he does have a track record of philanthropy. You may have heard of the Usain Bolt Foundation and Usain’s efforts to help Jamaican youth excel and help Jamaica in general. But you might not have heard that Usain adopted an abandoned cheetah cub when he was in Kenya in 2009.

Kenya is famous for its wildlife, but unfortunately that wildlife is being threatened by a variety of human factors. Usain wanted to help, so he paid $13,700 to formally adopt the cub, who was being raised in an animal orphanage in Nairobi. He named the cub Lightning Bolt, which is also his own nickname. And he agreed to pay an additional $3,000 a year, part of that money was to be used to take care of Lightning Bolt and the other part was to be used for wildlife conservation efforts.

Here’s a short video of Usain’s visit to the animal orphanage, you can even see him bottle feed the young cheetah:

So, it’s clear that Usain has a desire to do good in general and that he also wants to act in the animals’ best interest. There’s a common view in society, which was even more common at the time, that the best way to help animals is to donate money to organizations that focus on the conservation of wildlife, specifically endangered species. So, it’s understandable that he chose to help in this way.

Unfortunately, society has a blind spot for the billions of animals in captivity. The average chicken experiences far more suffering before they end up on a plate than that abandoned cheetah cub ever did. And the animal industries also contribute to the decrease in wildlife because they require far more land and produce far more pollution than plant-based food production. If Usain was aware of this, he might not be willing to consume and use animal products anymore.

Tracking the changes in Usain’s diet

Usain was born and raised in Trelawny Parish, a rural area of Jamaica. He’s not the only world-class athlete from that area. And when his father was asked about Trelawny’s secret, he mentioned three things: the characteristic yellow yams of the area, dumplings and green bananas. Of course, this isn’t proof of any kind, but the fact that he didn’t mention any animal products does tell us something about the diet Usain grew up on.

For most of his childhood, Usain was more into cricket than into running, but he was so fast that people couldn’t help but notice. So, he started competing as a runner. When he was 15 and already 6’5” (1.95 m), the world junior championships were held in Jamaica and he won the 200 meter in world record time. He became a star overnight and moved to Kingston, Jamaica’s capital, shortly after.

The city didn’t just bring him opportunities to further his athletic career, it also brought him distractions. One of those distractions was junk food. He ate a lot of it, particularly chicken nuggets, chicken wings, and Jamaican burgers that were bigger than the ones at McDonald’s. He thought that he could run on natural talent alone. And to a certain extent, he could.

Around the age of 19 he started taking his athletic career more seriously, and a few years later he became a worldwide sensation at the 2008 Summer Olympics in Beijing. His day to day diet may not have been dominated by junk food anymore, but he still ate it. And because he found Chinese food “odd” he stuck with McDonald’s during his 10 day stay in Beijing. By his own estimation, he ate 100 chicken nuggets every day, so 1,000 chicken nuggets in total.

Even though he still outran all the sprinters who were on healthy pre-race diets, he did realize that chicken nuggets weren’t optimal for his performance and he worked on his weakness for junk food over the years. In 2015 he said: “I have to cut junk food out. I think that’s one of the biggest things for me, because I get a lot of urges at late nights, just to eat junk food. For me, that personally is one of the biggest sacrifices.” He was also clear on what he needed to eat more of: “Food wise, I have to eat a lot more vegetables.”

Usain has since retired as a sprinter, so we will never know how fast he could have been on a whole-food, plant-based diet, but it would certainly benefit his health and the animals if he cut out animal products completely. And, of course, junk food cravings can just as easily be satisfied with vegan junk food. There’s no need for us to kill animals for any type of food anymore.

Besides his other activities, Usain also co-founded the Jamaican restaurant chain Tracks & Records. The chain can be described as a fast food chain, but the menu consists primarily of Jamaican food, instead of food that is more commonly found on the menus of international fast food chains. Unfortunately, almost everything on the menu contains animal products. Hopefully, Usain will explore the various downsides of animal products and replace the items on the menu with equally tasty plant-based food in the future.

Do you want to learn more about veganism? Check out our list of free resources!

Did you spot inaccurate or outdated information in this article? Let us know!

Photo by keithallison / CC BY

Photo by idsportsphoto / CC BY